Here is another part of the series of articles, regarding my last year’s trip to Kuala Lumpur, Malaysia’s Islamic Arts Museum.

The next section we visited in the Islamic Arts Museum Malaysia, after the Living with Wood Gallery, is the Fabrics Exhibit. This particular gallery is the largest one on the Second level, and occupies a J shaped walkway area surrounding a central staircase which leads to the Malay World, China and India gallery on the First level. One can imagine how fabric is an essential part of the Islamic world.

There are lots and lots of different kind of articles made from fabrics were displayed here from intricately woven robes and delicately embroidered cloaks and dresses, to serenely delicate veils and headdresses to awe-inspiring banners and flags, to richly decorated carpets and rugs and wall hangings, so many artifacts representative of the beauty of Islamic art in fabrics were featured here.

The exhibits are mostly displayed against the walls of the J shaped gallery. Behind the glass walls hung carpets, rugs, wall hangings, fabric panels, banners, flags, saddle covers all either intricately embroidered or woven or brilliantly dyed with fantastic colours of yellows, blues and reds. Glints of gold were everywhere – apparently, one of the preferred and well loved embroideries were made using gold threads.

Some of the displays, such as robes, cloaks, mantles and veils are displayed on minimalistic mannequins – headless torsos for the extravagant articles of clothing, busts for those magnificent veils and headscarves and headdresses. Many, if all of them are decorated with magnificent detailing such as gold coloured embroidery that must have taken years of work to make, coins and stones meticulously sewn on the veils and trimmings with incredible workmanship on the headdresses.

While many of these were made to show luxury of the life back then, some were made for religious purposes. There were panels printed with almost talisman-like decoration of calligraphy scripts that were arranged in geometric forms, Ceremonial banners with medallions of holy inscriptionsn and garments used to show one’s religious allegiance.

I learned that most of the exhibits in this gallery came from the Eastern side of the Islamic empire such as India, Iran and Turkey, from dynasties such as the Safavids, the Mughals and the Ottomans. They were responsible for great achievements in the fields. Their quality craftsmanship were even copied by others. For example,Flower and plant motifs that were developed in Kashmir  were later copied by the factories in Paisley of Scotland, hence the Paisley motif. I also learned that all of the artifacts were of later date – early Islamic fabrics were mostly fragmented and are of pitiful state, so the museum only displayed full, complete exhibits which of course, were made later.

An embroidered dress prominently displayed in the front of the gallery. The fabric looks like it is velvet, and the embroidery, as you can see, a rich, luxury gold which could takes perhaps months or years to work. This must be one of the proudest exhibit in the gallery. 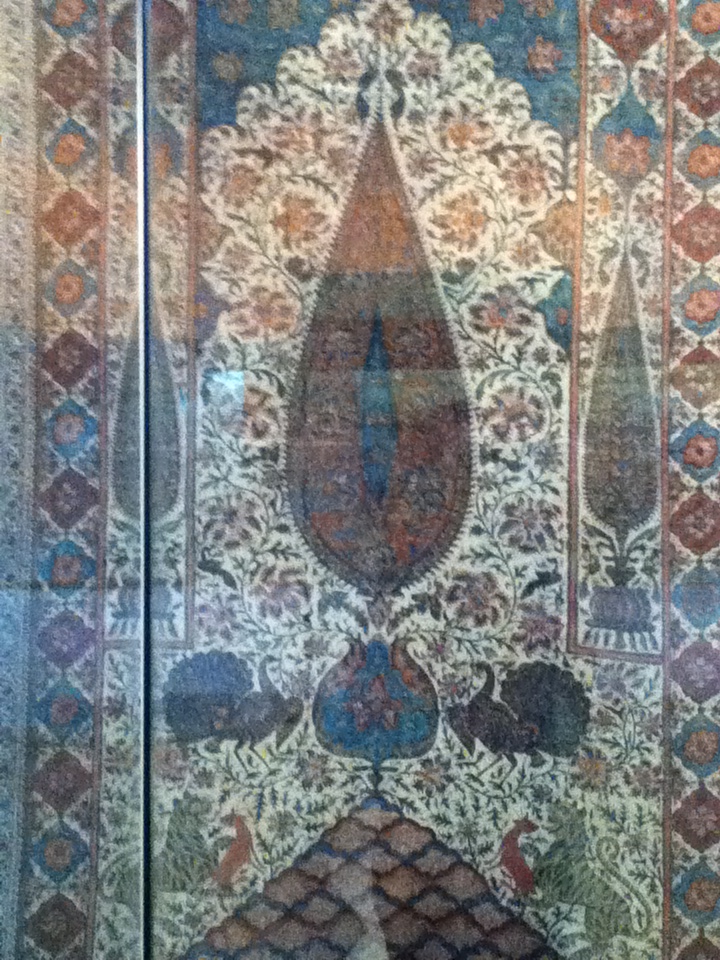 A textile, perhaps a rug or a tapestry, displayed in the gallery. You can certainly appreciate the amazing details on the piece – depictions of tigers, deers and peacocks with cypress trees and the seemingly endless arabesques around them. Knowing that this was produced on a loom adds to the amazement of the article.

One of the veils on display at the gallery. This one is a long veil, perhaps used as a Niqab, covering the entire body except for the face which then maybe be covered with a separate piece along with a robe or dress.

Another veil or headdress being displayed in the gallery. This one is more decorative, perhaps an part of a traditional costume?

A beautiful blue-grey dress with gold accent. It is displayed with other robes, but this one particularly caught my eye.

Reading the above topic, one would think…with all the negative stigma attached to the Islamic image ,and the fact that Islamic art is used mainly for things accociated with religion can Islamic art be accepted into modern design? I believe it may be so!

It seems that people are starting to see beyond the Islamophobia hype that the ‘media’ keeps lumbering its consumers and start to see the beautiful, poetic side of  Islam, which is really, already fundamental in Islamic teachings. People began to see, if not the spiritual side, the aesthetic, physical beauty of Islam, in the form of art and architecture.

Islamic art and motifs began seeping into modern designs very recently. The images of geometric patterns usually found within Islamic context are appearing as wallpaper designs or rugs. Modern takes on Masyrabia appearing as grills and window decoration are getting the attention it deserved.

The art of calligraphy is also getting a modern makeover these past few years. While traditional forms and styles such as the Nasakh and Thuluth scripts are still preferred mostly in religious context such as the writing of the Al Quran manuscripts and decorations, Arabic scripts are being re-imagined with modern twists. For example, the Kufic script, which already exists over a millennium ago, getting a modern makeover, and used as decorative elements and also as logos.
Recently, i was invited to a group call Friends of Kufi Square on Facebook. They specialize in teaching and discussing about square Kufi scripts, which, according to samples being displayed on the page, were used as logos from restaurants to associations and companies.

A Kufi logo, for a company made by coroflot.com

The trend has been going for quite some time now and it did not show the signs of slowing down. I am myself thinking of decorating my own bedroom with geometric pattern but that is for another post, another time….

I have been, again, struggling with my internet connection. It keeps dropping every few minutes, making posting simple, few paragraphs worth of post a frustrating experience.

So, I am actively trying other methods of keeping up this blog. I recently obtained an Android tablet and I just installed the WordPress application from the Google Store ; in fact, I am writing this on my tab. I didn’t go with the certain fruit named tablet because it doesn’t have the right features that I required, plus the pricing is downright exorbitant for someone like me.

Another reason that I think this might be a good idea is that when the cursed connection I am having is that a tablet is considerably lighter than my laptop (It is hard to lug around something that weights almost 2kg). Though, it is actually hard to do your typing on a tablet,it at least compensates carrying a co puter around and to be honest,the onscreen keyboad is good enough to use, although not in rapid typing I am used to on a traditional computer with a keyboard.

I am looking forward to hopefully more post that can be done on my tab. Ah, technology…one moment you are annoying and another you are making my life easier.

Continuing my series of articles on my visit to Kuala Lumpur Malaysia, in particular to the Islamic art Museum there.

Next up in my walkthrough the museum galleries is the Living with Wood Gallery. There is actually another corridor-gallery between the Metalwork and Ceramics Gallery and this Gallery, that is the Coins Gallery. However, Only having my iPod with less than a 1mp camera, I cannot take the pictures of the coin gallery, since it will only end up blurry, and only the well lit and transparent background will be visible. Hopefully I will be able to travel there again, so I can then do a thorough research and take picture in a better detail.

The Living with Wood gallery, as the name suggests, features artifacts from the Islamic World which utilizes wood. Now, you may think that, since Islam is pretty much associated with the Middle East and its surroundings, and in turn, associated with dry deserts with no trees whatsoever (I thought of that too) this gallery will in a way, reverse that misconception.

The artifacts mainly came from India and Central Asia, but if you think about it, these places were quite dry too. However, the gallery holds many wooden items ranging from furniture such as dressing tables, screens, mirror boxes, chests and chairs, to small daily equipments and necessities such as pen cases , plates, dishes and even chess sets.

Many if not all of the items were richly decorated – some were inlaid with ivory, mother-of-pearls and gemstones, some were gilded, some were carved with intricate designs of Arabesques and Geometric designs, some were painted with luxurious colours that you can still see today. Understandably, this kind of treatment given to the items were due to the scarcity of the material itself. Wood were precious mainly to the fact that as I had noted before, the artifacts came from areas where timber were rare and difficult to work with, since the climate may cause the material to warp. The craftsmen paid extra attention when working with wood and requires a high level of skill, hence the lavish decoration each and every item on display. 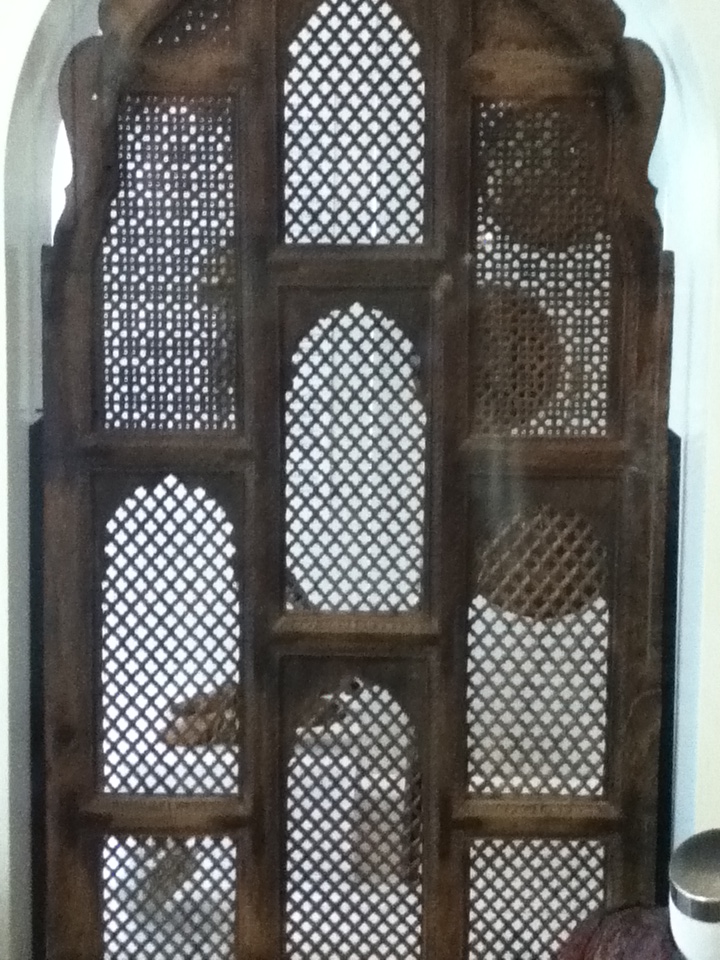 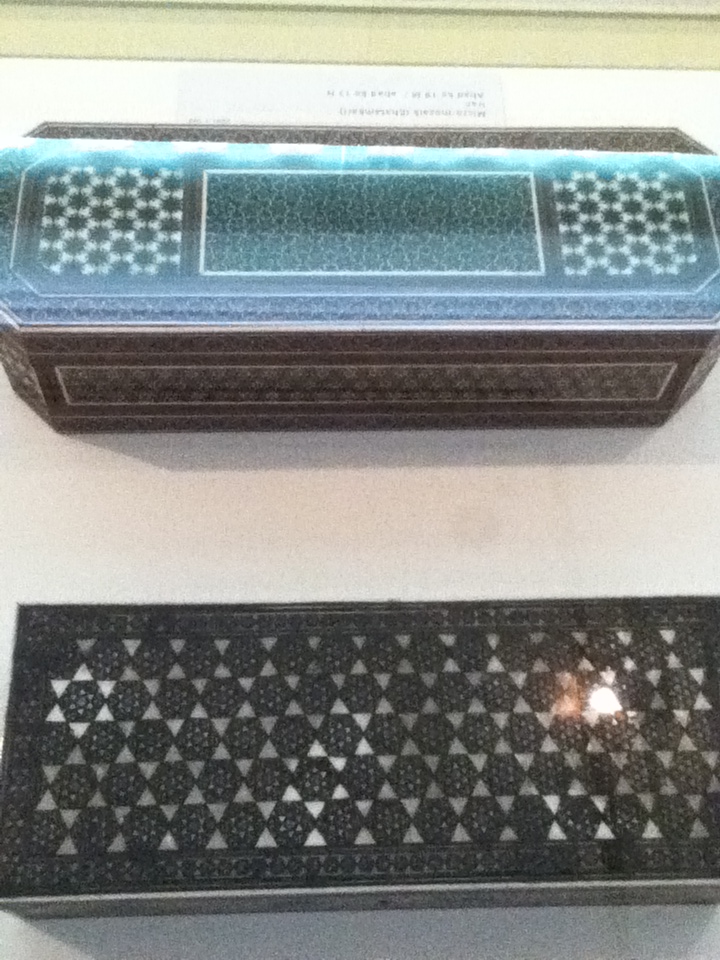 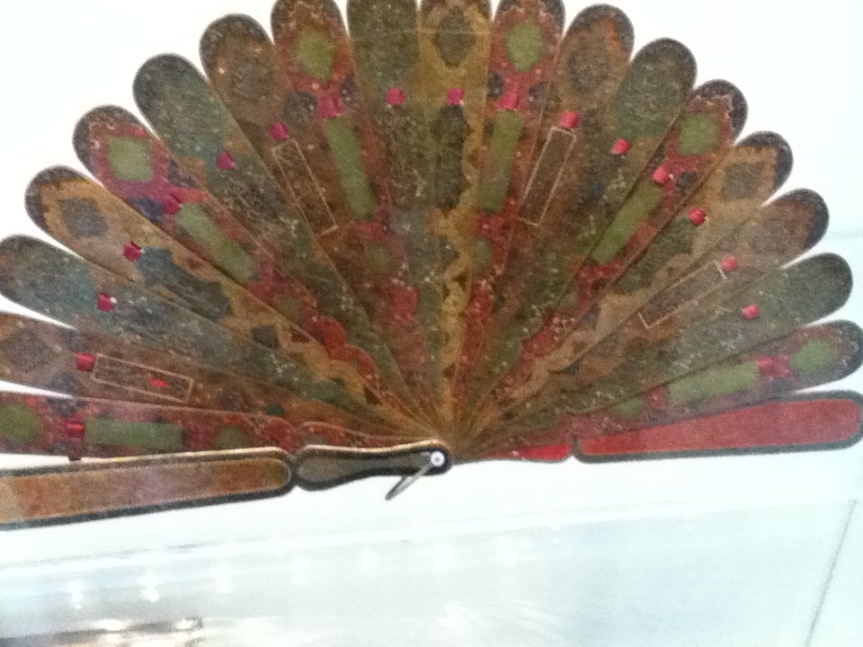 A flamboyant (decorative?) fan, embellished with calligraphy and arabesques.

An Indian Chess Set. I can imagne that this piece were made somewhere around the 18th or 19th Century, during the colonization period of Britain (and other European Power). One can see the cross on the bishop piece, which makes the set fit to the European taste.

A few weeks ago, my facebook wall was quite abuzz with this video about something mentioning a dance that imitates the Islamic geometry design. Comments were all positive, many say it was very impressive, some say amazing. I was, of course, very interested and excited to see what is it all about! However, having a very undependable internet connection, I couldn’t open the video at all, not even in the lowest quality possible! For shame..

Now, in the dead of the night, I can finally see the whole video on an acceptable setting and by goodness the comments were right, he video is just amazing to see!

I quote the description in the video page on Youtube –

Dancers + camera + kaleidoscope = this infinitely gorgeous short video. (Watch in 1080p fullscreen if you can.) It’s made for TEDxSummit, an unprecedented gathering of TEDx organizers from around the world– and the video celebrates “the power of x” to multiply great ideas.

The video, as the description above said, were a combination of many artistic elements. The whole video was shot using an eighteen metre tall mirrored triangular structure (imagine that!) with the help of dancers whose choreography created designs with their poses. Since they were using a triangle structure, the designs recreated were six-pointed in nature – hexagrams and hexagons. It is simply a sight to behold!