The following article is a guest post from Batik Boutique, which discuses briefly about Batik Art and its relationship to Islam. 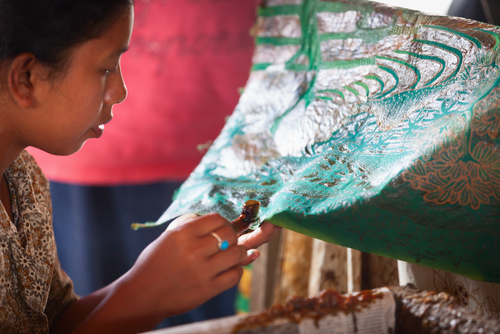 Batik is such an ancient and widespread art form that it is difficult to trace the exact origins of the craft. The word “batik” derives from the Javanese word titik meaning “to dot.” Batik refers to a technique of wax-resistant dying that has been around for thousands of years and used throughout many different cultures. It is an intricate and labor-intensive process wherein skilled artisans create beautiful, detailed layers of patterns, colors, and unique designs in cloth or fabric. At the Batik Boutique, our artisans and craftsmen are empowered through their mastery and application of batik. For us, understanding and appreciating the rich history of batik empowers our practice of this ancient art form.

Early examples of batik have been found in the Far East, the Middle East, Central Asia, and Africa dating back over 2000 years. There is evidence that the ornate designs were used in Egypt during burial ceremonies as far back as the 4th century. Batik patterns were present in artwork during the Tang Dynasty (618-907 AD) in China and the Nara Period (645-794 AD) in Japan.  Examples of batik methods of craftsmanship also emerged in the early centuries AD in the Yuruba tribe of Nigeria and the Soninke and Wolof tribes of Senegal. While wax-resistant dying and batik style artisan work may have developed independently in multiple regions, it is likely to have its origin in China. From there, the intricate patterns and methods of batik quickly dispersed around the world. The art form traveled along caravan routes and trading roads west to the Middle East and India, and south to the Malay Archipelago, where the artists of the Batik Boutique are practicing today.

Batik made its way along this path, spreading its intricate designs and geometric patterns all over the world. Each region has developed their own specific uses for and patterns of batik art that are unique. The Malay Archipelago is widely considered home to one of the most developed and advanced uses of the batik method, specifically in Indonesia and Malaysia, where we have our studio. The island of Java in Indonesia has been particularly influential on the history and modern application of batik art and craftsmanship in textiles. From the 6th century, batik patterns could be found in clothing, carved into statues, and on paintings. These intricate patterns were traditionally designs consisting of flowers and leaves, designs which are still seen in fashion and art in the Malay Archipelago today.

The advanced development of batik art on the Malay Peninsula is closely linked to Islam. While batik spread to Malaysia before Islam, the influence of the religion no doubt compounded the importance and prevalence of batik artistry. Batik art lends itself specifically well to Islamic cultures. In order to avoid the interpretation of human and animal images as idolatry, Islamic artists do not depict humans or animals in their art. Batik allows artists of Islamic faith to use stylized ornamentations to create aesthetic images and geometric patterns called ceplok to symbolize animals, plants, and even people in non-realistic, almost abstract ways. Batik has allowed Islamic artists the freedom of expression while still honoring their religious beliefs. Where we have seen Islamic art flourish, batik designs and methods are typically present.

While batik art has been prevalent in eastern cultures for thousands of years, it only reached Europe as an art form in the 1900s. The Dutch are often credited with bringing batik textiles back to Europe from their colonies in the Malay Archipelago. With a resurgence of interest in handmade craftsmanship after disillusionment with the Industrial Revolution, the intricate and “exotic” designs found in batik became fashionable in clothing and furniture throughout Germany, Poland, France, and Great Britain.

Today, Indonesia and Malaysia are home to the most batik artists and craftsmen. Outside of the Malay Archipelago, there are over 1,000 batik artisans still using the art form. The Batik Guild, based in the UK, was established in 1986 to encourage the appreciation of batik and to promote understanding of the art form. The artists at Batik Boutique do our part to further the continuation of batik art by offering classes on batik techniques at our studio in Kala Lumpur. 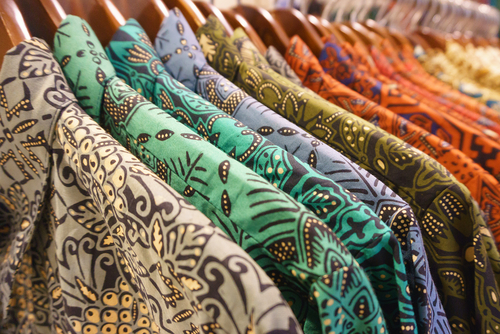 At Batik Boutique, we are proud to continue the long tradition of such a beautiful and historically rich art form. Our skilled artisans are empowered through their knowledge and mastery of batik, creating intricate and ethical Malaysian fashion, home goods, and gift items. While the art of batik spread to Malaysia before the arrival of Islam, both batik & Islam have remained a huge part of Malay culture. Batik is even considered the national dress of Malaysia and citizens are encouraged to wear batik designs on certain days of the month. In this instance, fashion is seen as both a form of art and part of a historical tradition. At Batik Boutique, our local artisans are committed to providing authentic batik craftsmanship and upholding the traditions of this ancient art form.