Continuing on from my last post, we go on to the next gallery, The Malay World, which is immediately in front of the China Gallery. This gallery, in my opinion, houses a significant collection of Islamic Malay artifacts, ranging from small coins to handwritten manuscripts to carved gateways. All of these artifacts to me seemed eerily familiar even though they obtained many of the items from Malaysia and Indonesia – perhaps simply because I have lived in the Malay archipelago all my entire life, i might have chanced on one of the items or its replicas.

the exhibits are displayed around a large hall, and like the China Gallery, under another heavily decorated dome, amber in colour. Surrounding the hall are artifacts such as coins and manuscripts displayed in glass cases, as well as some smaller items displayed under the massive dome itself. 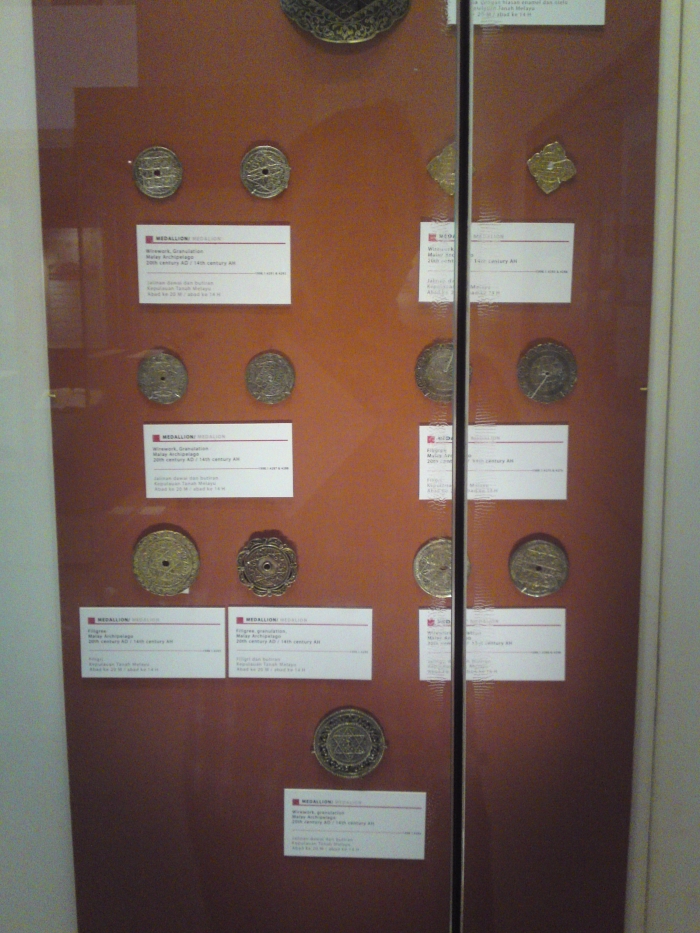 Medallions on display in the Malay World Gallery of the Museum – apologies for my reflection!

Some artifacts are displayed against one wall of the hall in glass cases. Here medallions, coins and more manuscripts and hand written Al-Qur’an are being displayed, alongside explanations of motifs and designs common to the Malay Islamic world. 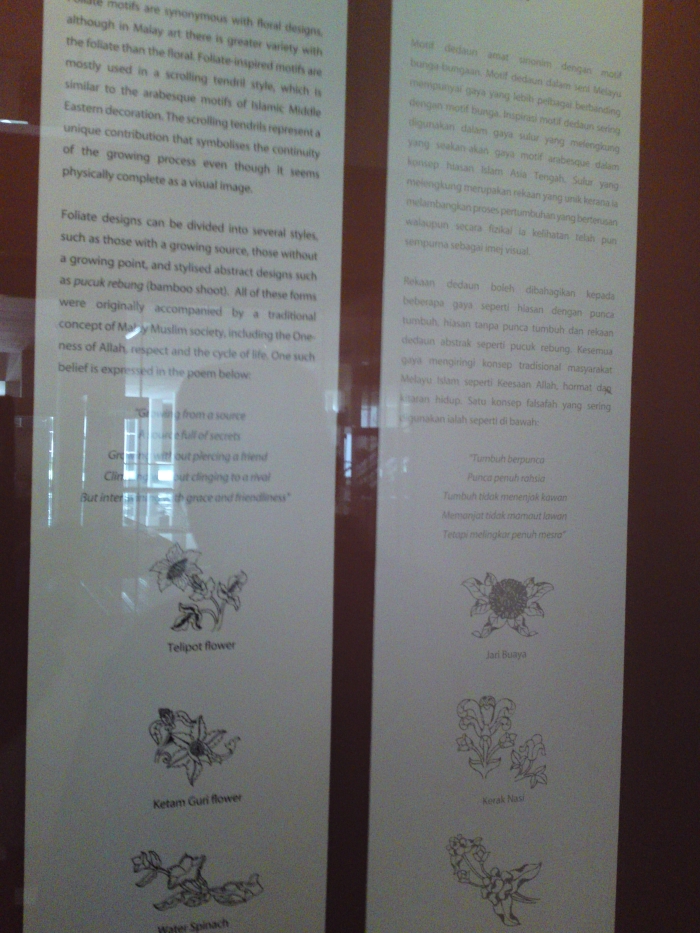 A panel explaining the different motifs found in Islamic Malay world – this one discusses foliage type of motif, the similarities and differences between the motifs and arabesques of the middle east as well as samples

In my opinion by looking at the exhibits, and having been to Indonesia a couple of times before, I see the similarities of the designs with Javanese batik designs and Balinese woodcarving motifs. Hindu and Buddhist influences are aplenty, as shown on the designs   on the illustrated pages of the handwritten Qur’an which looks similar compared to the traditional paintings of Hindu-Java or Bali, minus the figures. Also, the liberal usage or reds and warm colours, that can be seen on Buddhist or Hindu paintings are in contrast to the traditional Middle-Eastern illumination which mostly features cobalt and blues with golds. 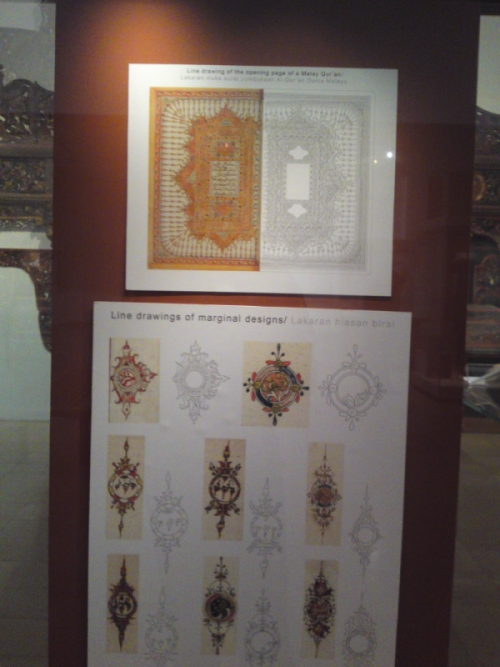 Larger artifacts were displayed against one wall with velvet ropes around them. Among the larger artifacts are a majestic carved gateway with Malay designs. Traditionally in the Malay world, carvings are inspired by flowers and vegetation. Though stylized, one, with a very keen eye, can still see the specific plants or flowers the design were based upon, since the design were not as heavily stylized as the ones found in the Middle Eastern Islamic world. 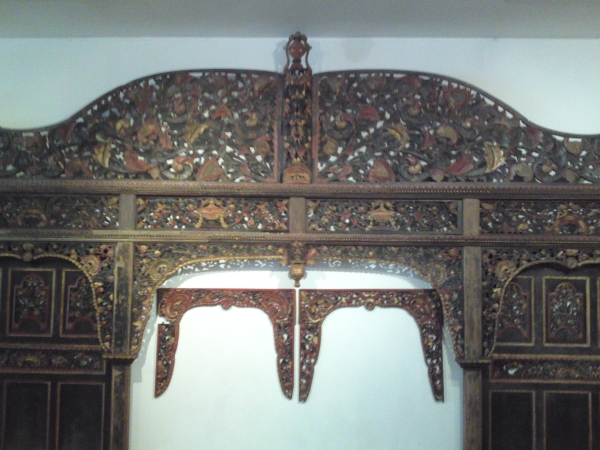 The large carved gateway. This magnificent paneled doorway were carved and painted with golds and red and oranges.

Another large artifact of note is a chair, more like a throne made of silver and leather. The chair is for the Khatib, the sermon reader in the Mosque during Jumu’ah or congregational Friday prayers. The seating was a gift from the Indian government to the Malaysian government, however it still has Malay characteristics to it. 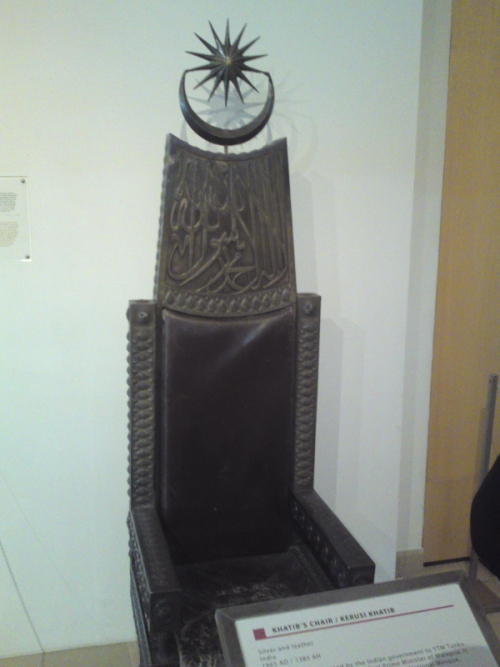 The Khatib’s chair made of Silver and leather.

And finally, above all the displays and the artifacts is the majestic dome, decorated with arabesques in amber, like a sun radiating its light above the visitors. 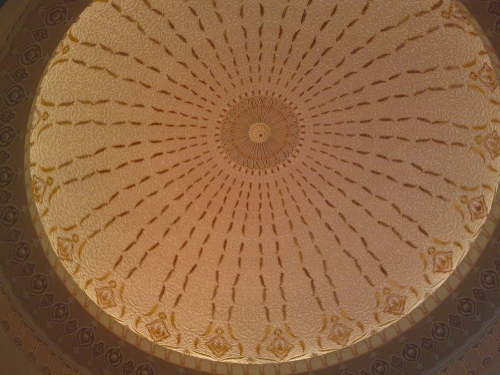 The dome high above the visitors in a warm amber light

For the nest post of this series I will start on the Indian Gallery.

Another 3 weeks of no posts, I am very sorry to keep you, my readers, waiting. I had a little ‘experimental’ vacation past few weeks and I did not bring my laptop because I might be charged with extra weight in my luggage! (the ‘perk’ of flying cheaply with a low-cost carrier). So my little vacation is over and there is work to be done both in the office and here in this blog…but my time is mostly committed to the problems at the office and now I have a little bit of time to spend on the blog.

During my vacation I *did* check up on the blog a few times and noticed that my application for adding some small ads under each posts have been accepted so if you notice something different…well, they are the ads. Nothing drastic I suppose. You might notice I haven’t put up the page for donations yet – I ran a few problems with setting up the Paypal account so I simply stopped. Though donations are still welcome :p

On a personal note, I ‘celebrated’ my birthday last month. Yikes, 25 years old now and I haven’t accomplished much. I guess I have to be serious from now on. Also I have re-obtained my lost ring during my vacation as a birthday present for myself…sounds pathetic, isn’t it?

I guess that is the news from the admin, stay tuned for more posts about my visit to the Islamic Museum when I had my vacation with my family to Kuala Lumpur, Malaysia, and perhaps an odd post here and there.

I do quite some DIY projects during my adult life especially after I got a good paying work to buy the materials because simply I like to create things. But like many things, sometimes the project doesn’t come out the right way that you wanted – you thought up the project in your head, the materials needed, the work et al. Of course during this period, everythitng is perfect, until you realize something is wrong in your plans and you already did it and there is no turning back and ultimately screw the whole thing up.

This one project is one of them.

I obtained one of the few cheaper item available in the local IKEA store – the LAMPAN table lamp. It is a simple but effective bedside lamp with a too easily removable plastic lampshade. When I got it I thought, I can make a new, Islamic geometry, lampshade with some black construction paper and some laminate I got lying around the room. So armed with a brand new box cutter,a template copied from a printed photo of a wooden door from Egypt and white coloured pencil, I went with the project one night.

I stated with measuring the circumference of the lamp, and it is exactly the length of three construction papers put side to side. I work the papers one by one, copying the pattern of the template using a white colour pencil. It is a simple process requiring just a bit of my time since the patterns fit nicely with the width of the construction paper. 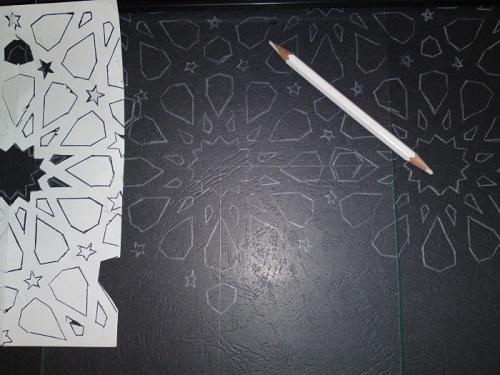 Template on the construction paper, with the drawn white lines

After the pattern copying was done I cut them out – a rather simple process if I use scissors but the if I do they will fall apart. Instead I used some extra sharp box cutters (it actually cut through the board and onto the desk!) making sure that the pattern are cleanly cut. Then it was just a matter of popping out the patterns, and laying them between the sheets of laminating plastics. 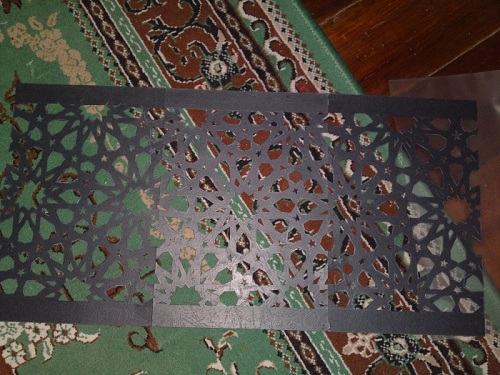 Now, laminating the whole thing would be much more simpler with a laminating machine, as well as if the article being laminated is flat. But for this project I have to laminate them in a cylindrical shape to conform to the lamp’s shape and to stick the pieces together (because if I use some type of glue or tape to stick them together it wouldn’t look like a single piece…or so I thought)

Using a pair of hot hair straightener I laminated the pieces together. I thought it was going nicely when I realized the irons weren’t long enough it didn’t reach the middle of the pieces. So with all my efforts, I still didnt managed to fully laminate the whole thing up. 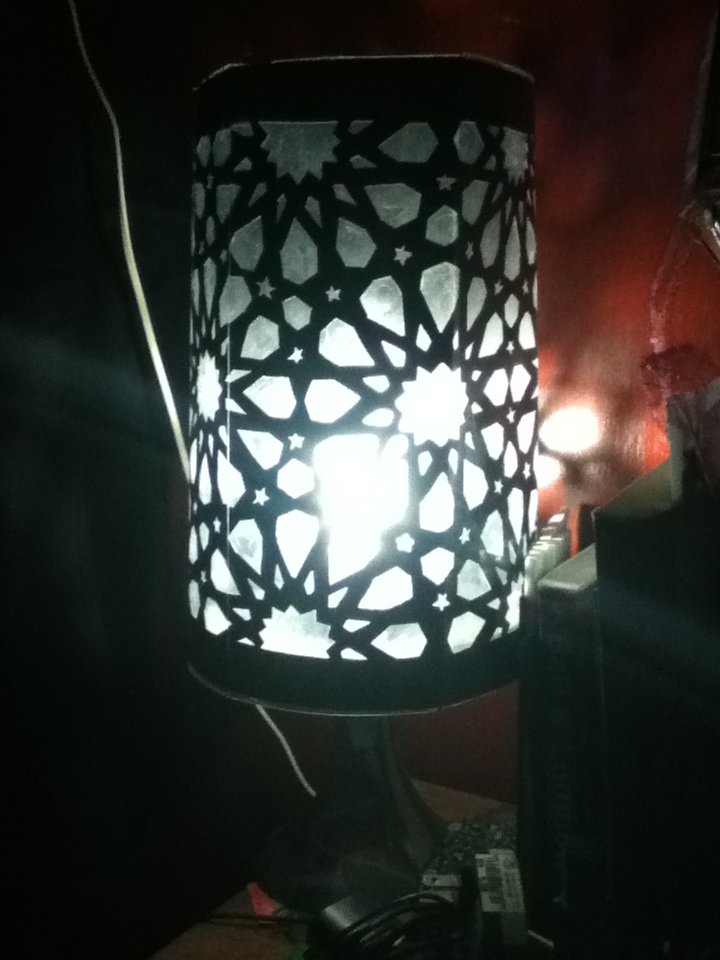 The finished ‘lampshade’ at night

Although this was, in my opinion, a failure, it still sits on the LAMPAN table lamp and frankly it gives of a nice pattern in the night and the laminate does a good job soften the light which would be too harsh without the included lampshade. I like to think that I am learning from all of this and hopefully I will have another chance at making another – I already thought of a lampshade for a pendant light out of a single paper!

*NOTE – there is some problem with uploading pics with WordPress, I will update this post when I can- you can’t really appreciate the post without the pictures!

UPDATE – Finally got the pics on…shrunk them to a considerably small size so that they can be posted here. Note to self – just use the iPod camera.