As a continuation from a post that I had written on the end of last April, we will discover more about this delightful city mosque. This time we are going to get inside the mosque and discover the Islamic art and architecture featured.

Approaching the mosque from the main entrance to the east, through five tall arches, we enter the courtyard of the mosque, where you can go to administrative offices of the mosque. Also, this is where artists displaying and selling their Islamic artwork. conveniently, there is an ATM installed just outside of the entrance of the courtyard on the left. We (me and my family) were rather shocked and confused to find this machine to actually be on the site of a mosque, as if it has turned into a mini shopping mall of some sort, especially considering the bazaar building outside next to the parking lots. It is almost like the mosque authorities are actually monetizing a religious place. This instance, of course, never happened in our country. In our confusion, we did not take any pictures in this area. However, I found a picture from Wikipedia, showing the tall arches as well as the ATM itself, partially hidden by a car and a pillar just left to the entrance. 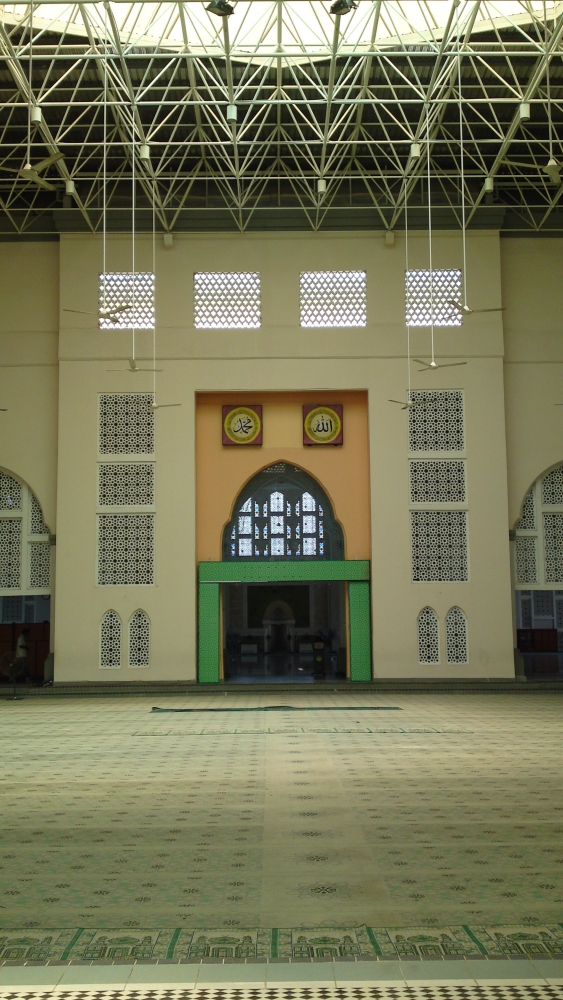 Past the tiled, open courtyard bathed in blue due to the translucent roofing above, we step into the carpeted outer prayer hall, bathed in natural light, muted by yet another translucent roofing, designed with a large eight pointed star motif. The whole roof is supported by steel beams, that also holds drop down. Fans hung low from the ceiling, whirring slowly above our heads, though it provides little comfort from the harsh afternoon heat permeating the mosque.  The prayer hall is surrounded by the Mashrabia windows, with the repeating patterns of eight pointed stars that can be seen from outside the mosque.

Inside the main prayer hall it was another different style. The floors are covered with tile instead of the carpeting used on the outer prayer hall. The colour scheme of the hall is white and gold, with hints of soft, pastel blues, greens, creams and earthy colours. As the exterior of the mosque have influences from the Prophet’s mosque in Madinah in Saudi Arabia, so does the interior.  The main, obvious influences taken from the Prophet’s Mosque is the two panels on the either side of the Mihrab. The panels’ design are actually based on the doors of the Prophet’s Mosque. Also, the Mihrab itself is based on the Mihrab of the Mosque in Madinah.

Above the Mihrab there was a triptych of stained glass windows featuring the same eight-pointed star patterns. With soft light shining through, it elegantly illuminates the rather dark areas below the main dome.

The main dome, which is beautifully decorated in blue on the outside, is also decorated ornately. The design, which features a geometric star design that blooms all over the dome, recalls of a blooming sunflower. The design recalls of the dome of Lotfallah mosque in Isfahan, Iran albeit less decorated. The all over design features calming colours of sky blue, mint green and cream accentuated with gold that reflects the scheme of the main prayer hall.

should you have the chance to visit Kota Kinabalu, don’t forget to pay a visit to this Islamic architectural jewel set to a breathtaking backdrop of the mountains and the sea.

Its already into the third day of Ramadhan and fasting but I hope it is not too late to say Ramadhan Kareem, Allahu Akram to my each and every Muslim readers.

The banner above features a stained glass dome that can be seen in Jame’ Asr Hassanil Bolkiah of Brunei.  Have a happy and blessed Ramadhan, full of joy and happiness