First of all I would like to like to wish my Chinese readers a  very happy Lunar New Year! Wishing you all the prosperity and abundance in this Year of the Rat for you, you friends and your family.

For this post, in conjunction with the Chinese New Year, I would like to discuss a little bit about a pattern that is quite commonly used in the Islamic world, especially the Ottomans. The pattern is called Cintamani.

Now when I heard of this term, I was surprised because Cintamani (or Kintamani, depends on where there term is used) is not at all Islamic, Arabic or Turkish. As a matter of fact, Cintamani is actually derived from Sanskrit, a language used mainly by Hindus and Buddhists ( like Latin to Catholics) Seeing it sharing the name with the Balinese mountain Kintamani makes it even more curious. But what is Cintamani, in its original meaning?

Cintamani ( चिन्तामणि in Sanskrit) is a jewel that grants wishes in Hindu-Buddhist tradition, akin to the philisopher’s stone in Western alchemic traditions. In Buddhism, it is held by the Bodhisattvas or divine beings. It is also seen carried on the backs of Lung Ta or Wind Horses, depicted on Tibetan Prayer Flags. In Hinduism, It is associated with the deities Vishnu and Ganesha. In Hindu Tradition, it is possessed by the Naga King, or on the forehead of the Makara, a sea creature. So in both of these contexts the Cintamani is a type of gem or pearl, borned by divine beings, that is why in Islamic art the pattern is a round gem like circle. However one might wonder, especially considering the sparse depiction of these gems in Hindu-Buddhist artistic traditions, where did Islamic artisans derive that ubiquitous image of the circles grouped into a triangle?

To begin with, The Hindu-Buddhist traditions depict the Cintamani as a singular gem or pearl, held by a divine being, not in the Islamic artistic rendition of the three clustered circles. Perhaps, one theory is that Cintamani to Islamic artisans, refer to a pattern of animal motif, perhaps that of a leopard. This theory is probable, as the pattern in most commonly combined with stripes that may resemble tiger stripes. However the lines could also mean an influence in the form of Chinese clouds.

In any way, the Cintamani pattern is a part of the Ottoman Islamic art motif, and this shows how the Chinese influenced the Islamic civilization whether in art or any other aspects. There are a lot of other influences and derivations in the form of  innovations form China that came into the Islamic world, such as the paper, that allows the compilation of the Holy book Qur’an, and many, many other things. Perhaps we will discuss these things in other posts.

An adult man’s quilted kaftan of red silk with a woven pattern of three yellow çintamani circles, each surrounded by a thin line of light blue. (Courtesy of http://home.earthlink.net/~al-tabbakhah/cintamani.html) 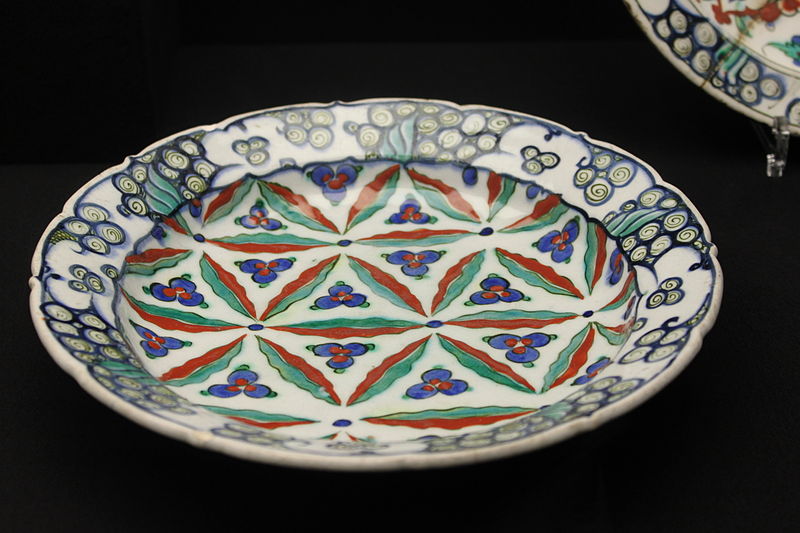 Ariana museum -islamic pottery – Plate – Iznik (Turkey) – 1580 -1585 – inventory AR 9875 Siliceous paste, polychromy under glaze – On the bottom, alternation of triple points (cintamani) and oblong and wavy patterns in the shape of lips. These patterns appear around 1500 on Ottoman textiles

This site uses Akismet to reduce spam. Learn how your comment data is processed.